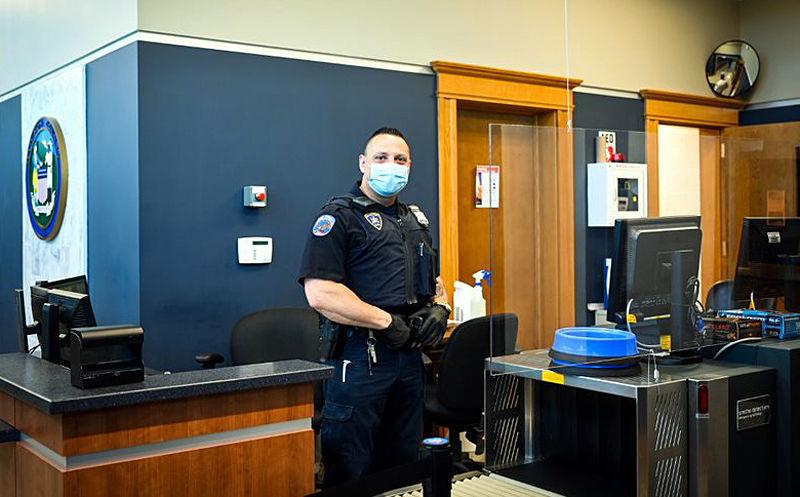 With in-person court operations resuming, albeit on a partial basis, in the 9th Judicial District, on Long Island, and in Ulster and Sullivan counties last week, courts in all 57 counties outside of New York City have reopened to litigants.

Although they won’t be functioning at capacity for a while yet, the return of judges, clerks, support staff and officers to their posts is one more indication that the state is inching out of the pandemic’s stay-in-place cocoon.

Patrick Cullen, the president of the New York State Supreme Court Officers Association, said the gradual reopening of courts in the 9th District, coming on the heels of similar efforts statewide, was the best way to work toward resuming full-service operations.

“It’s an extremely limited version of reopening. We’re slowly increasing the number of people,” he said, with some staff—judges, chambers staff, clerks, tech people, and, of course, court officers—back on duty after nearly 10 weeks of extremely limited operations in the 9th District and elsewhere.

“Precautions are being taken,” he said during a break from touring courthouses in Westchester and Orange counties following their soft reopenings May 27, when roughly 30 percent of SCOA officers were back at their posts. “If there are any complications, we’re going to scale it back down.”

Dennis Quirk, the president of the New York State Court Officers Association, said May 28 that he expected courts in New York City to reopen within two weeks.

“But there’s a lot to be done,” he said, including the placement of acrylic and Plexiglass curtains and hand-sanitizer dispensers, and the disbursement of protective equipment within those courthouses.

And walk-throughs of courthouses have yet to be scheduled, and work details, with officers’ shifts expected to be parcelled, perhaps on a two-week-on, two-week-off basis, must also be worked out.

Mr. Quirk said he anticipated that just 20 percent of city staff could be brought back with any degree of confidence when those facilities reopen, “because there’s no way to do self-distancing,” particularly within officers’ locker rooms, elevators and bathrooms, all which can get exceedingly crowded.

Chief Judge Janet DiFiore cautioned that the reopenings did not signify “a return to business as usual” but rather the beginning of “a new normal.”

“So, while judges and their personal staffs, and certain essential court personnel, are back and physically working in our courthouses, we are limiting public density in our buildings by relying on virtual technology to conduct as much court business as possible,” she said in a May 25 video message. “This will be the new normal, and everyone will have to adapt and get used to the new normal as we gradually loosen restrictions and safely return, phase by phase, to fuller in-person operations.”

Court employees were returning to a changed environment, with more protective barriers, capacity limits and, of course, designated distancing space, all the better to assure safety.

As elsewhere, people going into courthouses were being obliged to wear masks, with court visitors required to undergo COVID screenings before entering. Litigants and their lawyers will encounter acrylic and Plexiglass sheets where there were none before.

Mr. Cullen said he was confident his members could go about their tasks with caution and diligence.

One significant concern will be the transfer of custody of persons scheduled for court appearances, which he said would be an even-more-complex undertaking given the virus’s presence, and particularly within correctional facilities.

Three of his members died of the coronavirus, and several others were critically ill, including one officer who just came off a ventilator after 35 days, he said.

“We don’t need to remake the mistakes that they made originally by not closing early enough…and I will not let them make those mistakes,” Mr. Quirk said, recalling exceedingly crowded courtrooms as the virus began to take hold in the city and elsewhere. “If they take any steps at all that place my members in jeopardy, we will close them down.”

Mr. Cullen said that although the reopenings had so far gone well, and his members were pleased to be back at work, there had been some communication snags between the union and some court officials, including within operations and labor-relations divisions.

“That line of communication has not been as accessible and open as it has been up here in the north” of the state, he said. “At the same time, this advanced very quickly.”