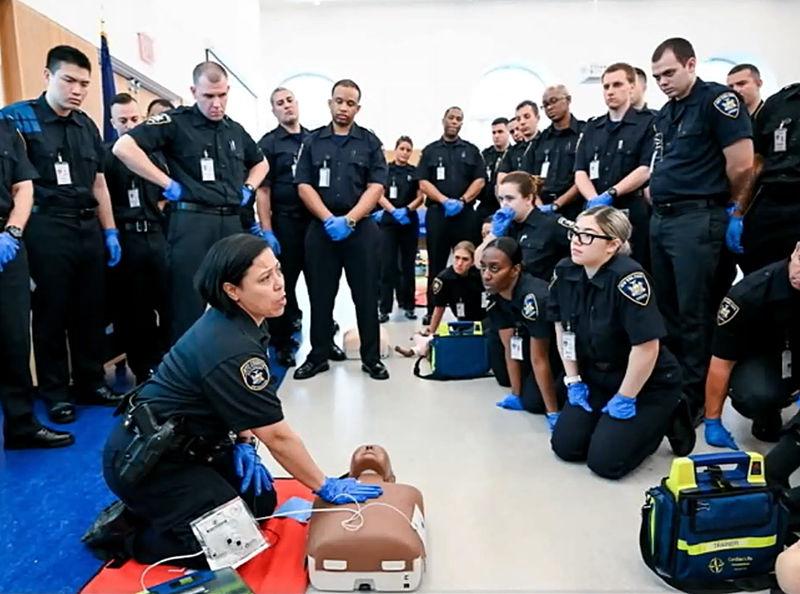 DEFERRED: The coronavirus pandemic obliged state courts to institute virtual operations to contend with caseloads. It also suspended instruction for a 211-candidate Court Officers Trainee class. Instruction was suspended March 17, roughly three-quarters through the curriculum. The class was to have graduated April 29.
Photo courtesy of the NYS Unified Court System

While some state courts remained open as the coronavirus pandemic spread, the outbreak obliged the judicial system to institute virtual operations to prevent a certain legal bottleneck. Since mid-April, judges, attorneys, litigants and defendants have been conferencing pending matters via Skype or telephone.

And while Chief Judge Janet DiFiore commended the court system’s technology staff for performing “herculean feats” to permit courts to go virtual, the leaders of two court officers unions criticized the Chief Judge for a lack of communication about the courts’ eventual reopening, which they said cast doubt on preparedness.

That reopening, however, is in all likelihood weeks away, and the court system will continue to expand and improve its virtual model, Judge DiFiore said.

Until mid-April, just essential and emergency matters were being heard. The virtual courts expanded significantly on April 13, with judges and lawyers tackling pending caseloads, including tort, commercial, matrimonial, trusts and estates, criminal, family and other matters, Judge DiFiore said April 20 in the first of two videotaped updates on the court system since the pandemic broke out statewide.

In that first week, judges and staff heard nearly 8,000 matters, settled or disposed of more than 2,600 cases—about a third of all the matters heard—and issued more than 1,400 written decisions on motions and other undecided matters.

Roughly 25,000 court conferences or other proceedings, both regarding civil and criminal matters, have been held statewide, a court-system spokesman said April 30.

The Office of Court Administration is “incrementally adding to the non-essential matters that are being accepted—things like accepting new motions on existing cases,” he said, although a moratorium on accepting new filings, either electronically or on paper, remains in place.

“It’s been said that in every crisis there is an opportunity, and every one of us understands that this is the perfect opportunity to clear out our motion backlog, prompt the resolution of those pending matters and put our court system in a much-better place to process the inevitable surge of new case filings that will come with our return to full operations,” the Chief Judge said.

A number of enhancements to the virtual courts were to have gone into effect May 4, including that notices of appeals could be filed electronically, as well as the expansion of motions that could similarly be transmitted.

The president of the State Bar Association, Henry M. Greenberg, welcomed the changes.

“New York’s lawyers are thrilled to see the virtual courts take another step toward normal operations, and we wholeheartedly support the latest actions taken by the court system,” he said.

At about that same time that happens, it’s expected that a class of 211 court-officer trainees will resume their instruction, which was suspended March 17 as the virus began to spread among the candidates, Judge DiFiore said April 28. The trainees were to have graduated the following day.

The Chief Judge on April 27 said 168 judges and court staff had tested positive for COVID-19. Three judges, including two Brooklyn Supreme Court Justices, have succumbed to the virus.

Although Judge DiFiore commended the court officers and Clerks who she said “have been unwavering in their commitment to our mission,” the feeling was not altogether mutual, with the president of the state Court Officers Association, Dennis Quirk, particularly disapproving.

“It’s a disaster…She’s trying to paint this rosy picture but they’ve done a terrible job,” he said. “You can’t implement something like this without talking to the unions,” he said of court operations.

About 300 court officers are on duty, as are about 150 clerks, he said. But 100 are out sick, and three of his members have died because of COVID complications, Mr. Quirk said.

He was highly critical of what he said was a lack of communication from the Chief Judge and from the Court System in general regarding the courts’ eventual reopening and the precautions that will have to be taken. Mr. Quirk said none of the 25 emails he had sent Judge DiFiore had been answered.

His assessment was echoed by the president of the Supreme Court Officers Association, Patrick Cullen, who also said communication from the Chief Judge was lacking.

“If you’re talking about taking temperatures, and obviously having multiple levels of protective equipment on top of testing and antibody testing, well, we better get moving. This is the type of stuff we should be doing now so that we are ready to open,” he said.

Regardless, Mr. Cullen said he expected a measured reopening of the courts.

“Nothing is going to go from the off-switch to the on-switch,” he said. “I anticipate a very gradual return to work for our officers, and I’m looking forward to getting our voice heard in this conversation about reopening.”