Exclusive from NYDailyNews.com By KENNETH LOVETT 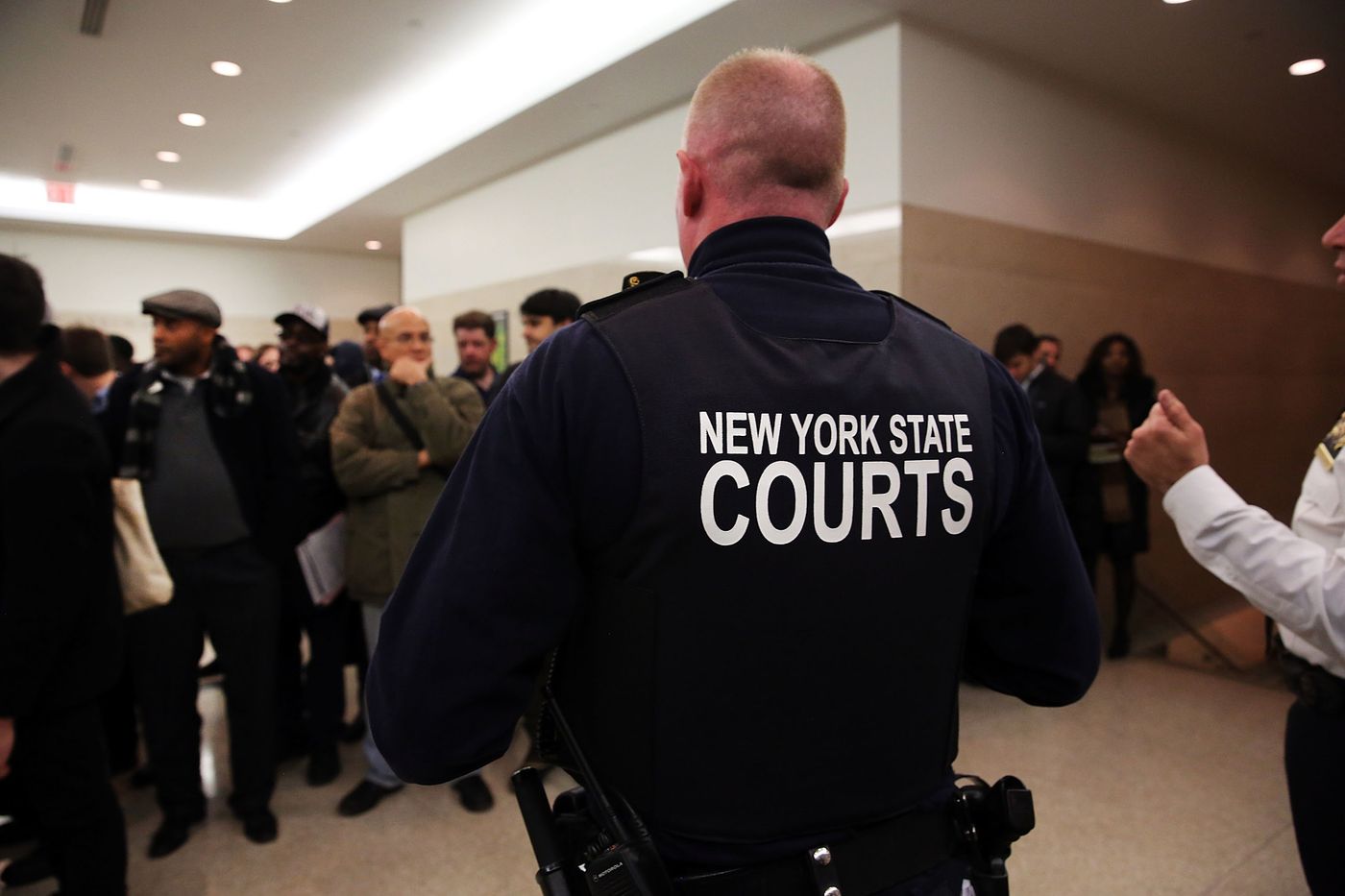 A court officer watches as protesters and members of the media stand inside a courthouse in the Brooklyn in 2015. (Spencer Platt / Getty Images)

ALBANY – The two unions representing court officers are calling on judges not to take the bench unless staffing levels improve.

“The courts are facing a crisis because of the extremely low staffing levels of court offices, which poses a dangerous threat to you, your staff, attorneys, prospective jurors and the general public,” Cullen and Quirk wrote.

“Courtrooms that once had four officers for trials or hearings, now often have as few as two,” the two wrote.

In Manhattan Supreme Court, anywhere from four to six courtrooms are closed on an average day because of a lack of officers to staff then, which causes delays, Cullen and Quirk wrote. The two referred to the suicide of Kalief Browder, who as a teenager spent three years on Rikers Island after being charged with stealing a backpack before the charges against him were dropped.

The staffing shortage has led to an uptick in injuries to court officers, with 60 on disability leave due to injuries suffered in courthouse altercations, “many of which could have been prevented with proper staffing levels,” the union leaders wrote.

“We respectfully ask you to take immediate action to help address this problem by refusing to open courtrooms without proper staffing under guidelines the Office of Court Administration issued in 2008, but which have been largely ignored,” they wrote. “You will be protecting yourself and the thousands of people who use the courts every day.”

Cullen and Quirk also urged the judges to demand that state Chief Judge Janet DiFiore hire more staff to meet the staffing guidelines, which in some cases, require as many as five court officers and one sergeant.

They included with the letter, a copy of the guidelines and a flyer titled “New York’s Court System is in crisis and waiting to explode.”

“We wanted to make the judges fully aware of our stance and our beliefs, and actually asked them to join us and do their part in helping us maintain a safer environment in the courts of New York,” Cullen told the Daily News. “Any judges where there isn’t a proper staffing level shouldn’t take the bench.”

Lucian Chalfen, a spokesman for DiFiore and the Office of Court Administration, agreed with the unions that additional officers are needed to open up more court rooms.

“We have been working to resolve that for months,” Chalfen said.

He said “a large number” of newly hired officers are ready for deployment starting in December, with the total expected to hit 400 by June.

In addition, the court system is scaling back its Mobile Security Patrol support unit that worked round the clock, with 34 members of the detail being reassigned back to courtrooms in New York City.

“As a uniformed force, New York State Court Officers are deployed in court facilities, throughout New York City and State, based on both public safety and operational needs,” Chalfen said.

The fight over the issue recently turned nasty on Halloween after DiFiore accused the unions of using an anti-Italian slur after its members at a protest days before outside an event the chief judge attended wore t-shirts that displayed the image of a scale of justice with the words “OCA, Office of Court Administration, Organized Crime Association, Beaver Street Bullies.”

DiFiore, who is Italian American, said while the “public airing of workplace grievances is of course acceptable, permitted and encouraged,” the use of “ethnic stereotypes is completely improper and unacceptable.”

The unions called her claims “spurious” and refused to apologize.

“We will not apologize for exercising our constitutional rights or for bringing to the public’s attention our concerns for public safety in the nation’s busiest judicial system,” Cullen and Quirk wrote at the time.