By Richard Khavkine – The Chief Leader 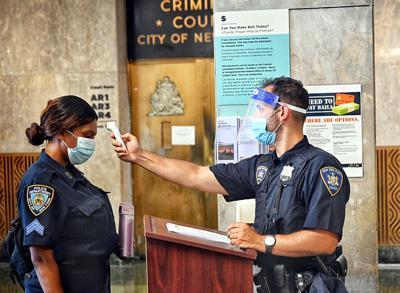 HOT TAKE: Court-officer unions have said that state court officials did not consult with them before mandating temperature checks for every courthouse visitor, and have expressed concern that the temperature guns used for the purpose, pictured above, are far from ideal as devices. Photo courtesy of NYS Unified Court System

Union officials representing court officers are pushing back on state court officials’ mandate that all entrants to courthouses be checked for high temperatures that could indicate a coronavirus infection.

The new policy, which went into effect July 6, involves pointing an infrared temperature gun at visitors’ heads to get a reading. That maneuver, however, takes place before a weapons screening, which could potentially set off tempers, particularly among those visiting criminal courts, said Patrick Cullen, the president of the New York State Supreme Court Officers Association.

“The entire scheme is half-baked,” he said. “This follows suit with a really lackluster performance” by court officials, including a lag in the installation of Plexiglass barriers inside and outside courthouses.

The union leader said Office of Court Administration officials had initially dismissed the idea of scanning for temperatures as courthouse reopenings were being discussed.

The surprise implementation of the policy, he said, ran counter to the Public Employees Fair Employment Act, otherwise known as the Taylor Law. Should discussions with OCA not lead to a resolution of the issue, Mr. Cullen said he would file a complaint with the state Public Employment Relations Board.

“We are attempting to and continue to press them to negotiate,” he said.

An OCA official dismissed the unions’ claim that the mandate runs counter to the Taylor Law.

“While the health and safety of everyone entering any of our courthouses is paramount, how we go about achieving that is at our sole discretion,” Lucian Chalfen, a court system spokesman, said in an email.  He said that the law permits employers to modify employees’ assignments “in ways that do not add duties beyond the essential character without the need for prior negotiations.

“New York State Court Officers are the most appropriate court system personnel to implement the screenings and have shown the ability to adapt to new conditions in the past, such as using the AEDs and administering Narcan.”

In fact, Mr. Chalfen added, refusing to perform the checks would actually be a violation of the Taylor Law but, he added, “we are open to, ready and willing to further discuss the issue at the Union’s earliest convenience, as their participation in keeping the courts functioning is integral.”

According to the policy, all visitors, including attorneys, witnesses, defendants, prisoners, staff and law-enforcement personnel sent to Unified Court System facilities are required to be screened and questioned before a security screening. Those whose temperature is less than 100 degrees and who answer “no” to questions about their potential illness or exposure can proceed to security screening. Those whose temperatures are 100 degree or above and answer “yes” to the questions will not be allowed in.

Peter Piciulo, the president of the Court Officers Benevolent Association of Nassau County, said that although he and his members were not opposed to the taking of temperatures, the practice was not adequately assessed beforehand.

“It’s just the way it’s being implemented,” he said. “In today’s climate, a uniformed officer pointing something at someone’s head isn’t the smartest thing.”

He said a less-cumbersome and invasive method would have been to use thermal-imaging technology to detect temperatures and potential illness, such as is being used in the COBANC offices. Although he suggested as much to OCA, he said he did not receive a reply.

“They didn’t put much thought into it,” he said of OCA officials, adding that court officials conducted no training on how to use the thermometer guns.

“It’s once again OCA not thinking it through and just putting it out there it’s just for looks, I think,” Mr. Piciulo said.

Mr. Cullen said several times visitors to the courthouses had readings in the 80s. “Nobody has a temperature in the 80s, unless they’re in the hospital or dead,” he said. “The readings of these scanners…aren’t indicative of the presence or absence” of the virus.

On at least one occasion, he said a courthouse manager superseded the policy by letting someone into the courthouse who admitted to having a high temperature as recently as the day before.