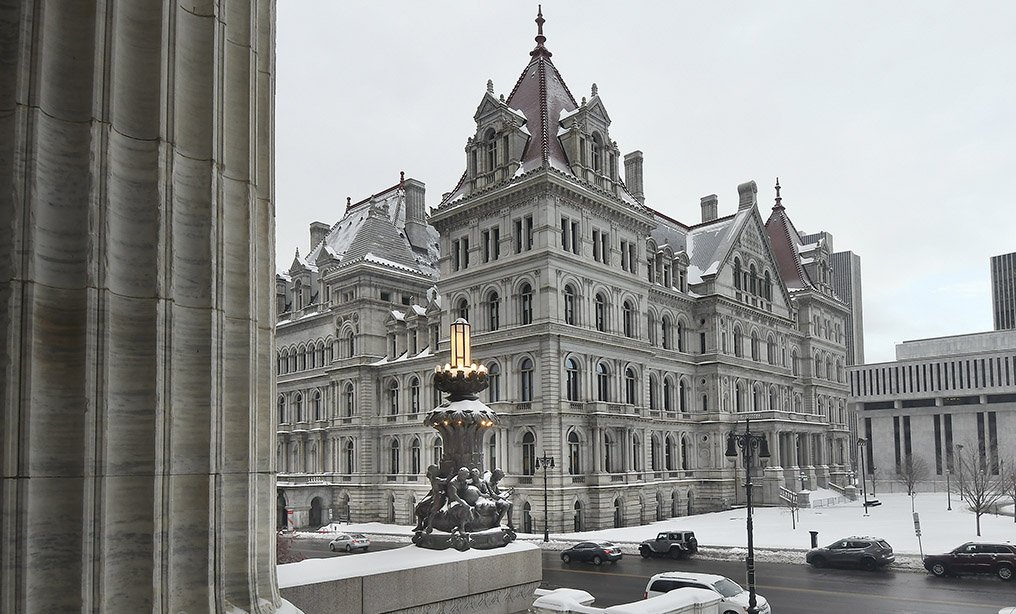 The New York Legislature appears poised to approve the state judiciary’s spending request of more than $2.33 billion in total funds as it was submitted without any cuts after both the Senate and Assembly included the plan unchanged in their own separate state budget proposals this week.

It’s standard for Gov. Andrew Cuomo to include the judiciary’s budget request unchanged in his own executive budget proposal in January, meaning that, as of now, Cuomo and members of the Legislature have jointly offered their support for the request.

The Office of Court Administration had asked Cuomo and lawmakers to approve a $45 million, or 2 percent, budget increase over last year’s spending plan for the state’s court system. They were also seeking $24 million in capital appropriations, or infrastructure spending.

Most of the latter increase is expected to be earmarked to finance staffing and salary increases, and continue the judiciary’s work in reducing court backlogs through Chief Judge Janet DiFiore’s “Excellence Initiative.” Lucian Chalfen, the spokesman for OCA, said the funding will help that progress continue.

“We appreciate the support of both houses of the state Legislature, and look forward to a favorable resolution of the budget process, as the funding will allow us to continue to move forward with the demonstrable results from the Chief Judge’s Excellence Initiative,” Chalfen said.

As Chalfen alluded, the funding commitment won’t be final until lawmakers actually introduce and pass a negotiated budget deal later this month. It’s due at the end of March. Assemblyman Jeffrey Dinowitz, D-Bronx, who chairs the chamber’s Judiciary Committee, said there was no conflict among members in the Assembly on the funding request.

“I look at them as a separate branch of government, so, within reason, we should go along with their request,” Dinowitz said. “I happen to think they need more money than they’re getting.”

Dinowitz, like others, has expressed support for more judges to be placed in state courts to help alleviate the problem of backlog, which has started to improve in recent years. Adding judges could mean changing a decades-old formula that’s used to determine the number of state Supreme Court justices, though the idea hasn’t moved in Albany.

State Sen. Brad Hoylman, D-Manhattan, who is chairman of the Senate Judiciary Committee, said granting OCA’s funding request was an important way to fortify the state’s court system regardless of what happens at the federal level.

“I think it’s critical during this period of uncertainty around the judicial branch in Washington that New York step up and provide the resources to keep the New York state judiciary strong,” Hoylman said. “I commend the chief judge for her efforts to use money allocated by the state Legislature efficiently and set benchmarks through her Excellence Initiative and that’s why we can confidently vote on a budget that includes the entire request.”

A funding increase for the state Commission on Judicial Conduct, though, is still up in the air after more funding was allocated to the panel under the Senate’s spending plan, but not in the resolution proposed by the Assembly.

The commission, which is the only state entity tasked with reviewing complaints of judicial misconduct and handing down sanctions for that behavior, formally asked lawmakers for a funding increase of $359,000 this year, which would bring their total budget to $6.1 million.

Commission Administrator Robert Tembeckjian said he hopes Cuomo and lawmakers come to an agreement during the budget process to grant more funding.

“We are very grateful for the Senate’s support, and we hope the enacted budget includes the resources we need to fulfill our responsibilities fairly and efficiently,” Tembeckjian said.

It would be the first significant funding increase received by the commission in nearly a decade, during which the panel has been given an additional $300,000 in the state budget. That hasn’t kept pace with its growing costs, Tembeckjian told lawmakers at a budget hearing in January.

Dinowitz said he wasn’t sure why his colleagues didn’t include an increase for the commission in their proposal, but that some were put off by the cost of its office space.

“I thought it made sense to increase it. I will say that some people did comment, as I did when I questioned them, that they thought it was a little wasteful spending so much of their money on their new headquarters with a heavy-duty rent,” Dinowitz said. “I think that put some people off, frankly, but I’m not sure if that’s the reason.”

Dinowitz was referring to when Tembeckjian testified during the budget hearing that the commission spends about $1.2 million of its current budget, set at about $5.7 million, on rent.

The commission has little control over that cost. Tembeckjian clarified later Wednesday evening that they had not moved to a new headquarters, but that their rent had increased due to a new lease negotiated by the state Office of General Services.

“There seems to be some misconception that the Commission has moved to ‘new headquarters’ when in fact we are in the same space we have occupied for the last 15 years, in Manhattan,” Tembeckjian said. “The Office of General Services, which makes these decisions, just negotiated a new lease to keep us in the same space and avoid the significant expense and major disruption that a move would impose on our budget and already bulging workload.”

The state Senate, conversely, included the full funding request from the commission in its one-house budget proposal this week. Hoylman said Tembeckjian’s testimony on the number of misconduct cases backlogged before the commission particularly prompted his support for the request.

“There’s a backlog of cases,” Hoylman said. “Once again, New Yorkers need to feel confident about their matters before the courts.”

Tembeckjian testified at the time that the commission had more than 200 cases of misconduct that were still unresolved at the end of last year. More funding would allow them to hire more staff and purchase transcription services to move things along faster, he testified at the time.

Cuomo and lawmakers will now meet behind closed doors over the next three weeks to hash out a final state spending plan, which is expected to total more than $175 billion over the next fiscal year.