“We see our funds as needing to be managed with one goal in mind and that’s maximizing the rate of return.”

Article from Vice.com By Geoff Dembicki 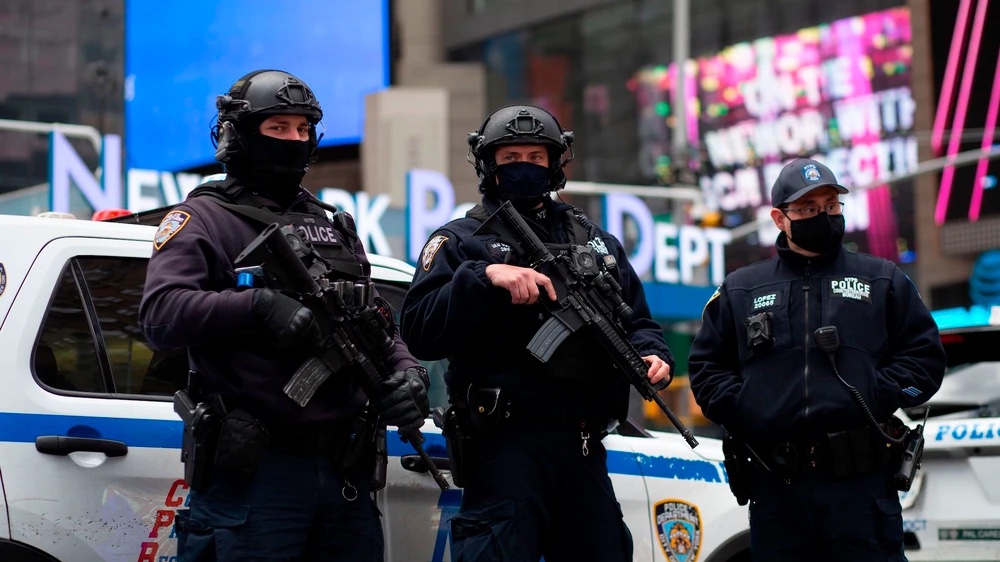 NEW YORK POLICE OFFICERS PATROL A STREET DURING THE PRESIDENTIAL INAUGURATION ON JAN. 20. PHOTO BY KENA BETANCUR/AFP VIA GETTY IMAGES

Police unions are pushing back against divesting their pensions away from fossil fuels, calling the move a “misguided policy” that could hurt law enforcement officers and take cops off the streets.

Last week, two New York City pension funds for teachers and other public workers voted to sell off $4 billion of their investments in fossil fuels to fight the climate emergency. But the unions for New York’s police and firefighters, whose pension funds are worth $63 billion out of the $240 billion total for public employees, refused to participate.

“The most active anti-divestment people are the police unions,” Pete Sikora, climate and inequality campaigns director with the progressive advocacy group New York Communities for Change, which has worked on divestment efforts at the city and state level, told VICE News.

The political leanings of New York City’s police unions, which supported Donald Trump during the 2020 election, likely have something to do with it, Sikora said. “They’re run mostly by Republicans,” Sikora said. Nearly 70 percent of police union leaders are registered to the GOP, according to a New York Times analysis, a party whose 2020 national platform called climate change “the triumph of extremism over common sense.”

According to Sikora, police unions “have been historically quite resistant” to divesting from fossil fuels. Police unions also fought New York state’s Fossil Fuel Divestment Act, introduced in 2019. It called on the state’s public pension fund to sell off roughly $13 billion worth of investments in 200 fossil fuel companies over five years. Fearing it could jeopardize the pensions of public employees, some labor unions pushed back. Law enforcement leaders were particularly outspoken.

“If divesting means taking millions from law enforcement, we will be forced to make the difficult decision of reducing the number of police officers or depriving them of much-needed resources to fight crime and stamp out the scourge of drugs sweeping across our state,” Thomas Mungeer, president of the New York State Troopers Police Benevolent Association, said at the time. “That is a misguided policy.”

One union leader told VICE News climate change wasn’t the main issue. “Whether it’s fossil fuel divestment or any other political topic, we see our funds as needing to be managed with one goal in mind and that’s maximizing the rate of return,” said Patrick Cullen, president of the New York State Supreme Court Officers Association. “This isn’t to say we have some kind of pro-fossil fuels political stance.”

In the end, a coalition of organizations called DivestNY helped pressure New York state to move forward with divesting. The state announced last December that its $226 billion pension fund will drop many of its polluting stocks by 2025, and aim to be fully carbon-neutral by 2040.

Police unions are also fighting to prevent divestment from happening in California. “We cannot afford to lose funding for law enforcement officers in exchange for a socially responsible investment strategy,” Jim Auck, treasurer of the Corona Police Officers Association, said during a 2017 meeting of the California Public Employees’ Retirement System (CalPERS), the largest public pension fund in the country.

The next year, Corona police sergeant Jason Perez won a seat on the CalPERS board explicitly campaigning against divestment, which he said “must be a complete last resort when lives are at stake, such as entire villages being murdered for the oil beneath their soil, or in instances where our money is used to support terrorism.”

Perez, who is a member of the National Rifle Association and president of an anti-abortion clinic in Corona, a city southeast of Los Angeles, told the Wall Street Journal that since his election “our default is not to divest.” He didn’t respond to an interview request from VICE News.

CalPERS hasn’t yet committed to a major sell-off of fossil fuel shares because many of its leaders think it’s more effective to pressure companies internally to become more sustainable rather than divest from them entirely, said Sandy Emerson, board president of the divestment group Fossil Free California—an ongoing debate in the investment world.

But people like Perez go much further in their opposition. “He would have the fund reinvest in everything they’ve divested from, including assault weapons and tobacco and private prisons and probably thermal coal,” Emerson argued. (In 2019, Perez tried unsuccessfully to get the pension fund to reverse its policy of not investing in cigarette companies.)

It’s in the best interest of police unions to push for the strongest possible efforts to fight global temperature rise, said New York divestment organizer Mark Dunlea. “The police will be first responders who have to rush into life-threatening situations to try to save people from extreme weather events like we saw with Hurricane Sandy. They should be among the unions most worried about the impact of climate change,” he told VICE News.

Many law enforcement leaders are opposed to fundamental societal change, however, whether that comes in the form of defunding police forces or divesting their pensions away from climate-destroying fossil fuels, said Colette Pichon Battle, who is a member of the policy leadership team for the Movement for Black Lives working on climate justice.

“They’re going to oppose change because the current system works for them,” she said. “But the system isn’t working for so many people.”