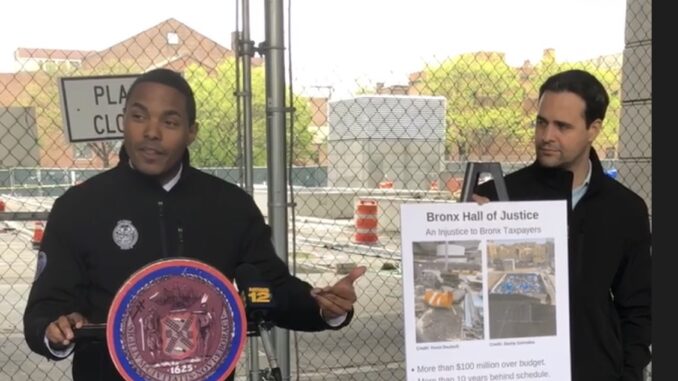 Responding to a Bronx Justice News investigation, City Councilman Ritchie Torres on Friday said he will make a referral to the Department of Investigation for an official probe into mismanagement and misuse of taxpayer dollars at the Bronx Hall of Justice—a property plagued by years of government waste, infrastructure problems, and delays.

Torres, Chair of the Council’s Committee on Oversight and Investigations—which has jurisdiction over DOI—made the announcement in front of the courthouse’s still-shuttered civic plaza on East 161st Street, a debris-strewn construction site Torres said is indicative of the building’s troubled history.

Far from the idyllic space the Department of Citywide Administrative Services assured the public would be open by the end of 2009–complete with evergreen trees and a pedestrian walkway—the plaza today remains closed, with much of it covered in tarp and dust.

Pictured: A rendering of the Bronx Hall of Justice’s courtyard-cum-civic plaza, which remains closed to the public.
Credit: Rafael Viñoly Architects

Torres said he planned to introduce laws via the new city budget that will make DCAS’ funding contingent on providing a plan and timeline for opening the civic plaza, designing a plan to keep it safe, and releasing data about courthouse maintenance and repair costs.

“The Bronx Hall of Justice has been a $421 million debacle,” Torres said.

Initially, the city had high hopes for the courthouse’s civic plaza. It was intended to be the architectural centerpiece of the courthouse—an “open and engaging”space where Bronx residents could take a break from legal matters, and enjoy a few moments of tranquility.

But eleven years after the courthouse opened its doors, the sprawling “public courtyard” remains closed to courthouse visitors. The unused space is costing taxpayers millions in maintenance and repair expenditures, and is unlikely to ever see public use unless an array of safety issues are addressed, a Bronx Justice News investigation revealed last month. 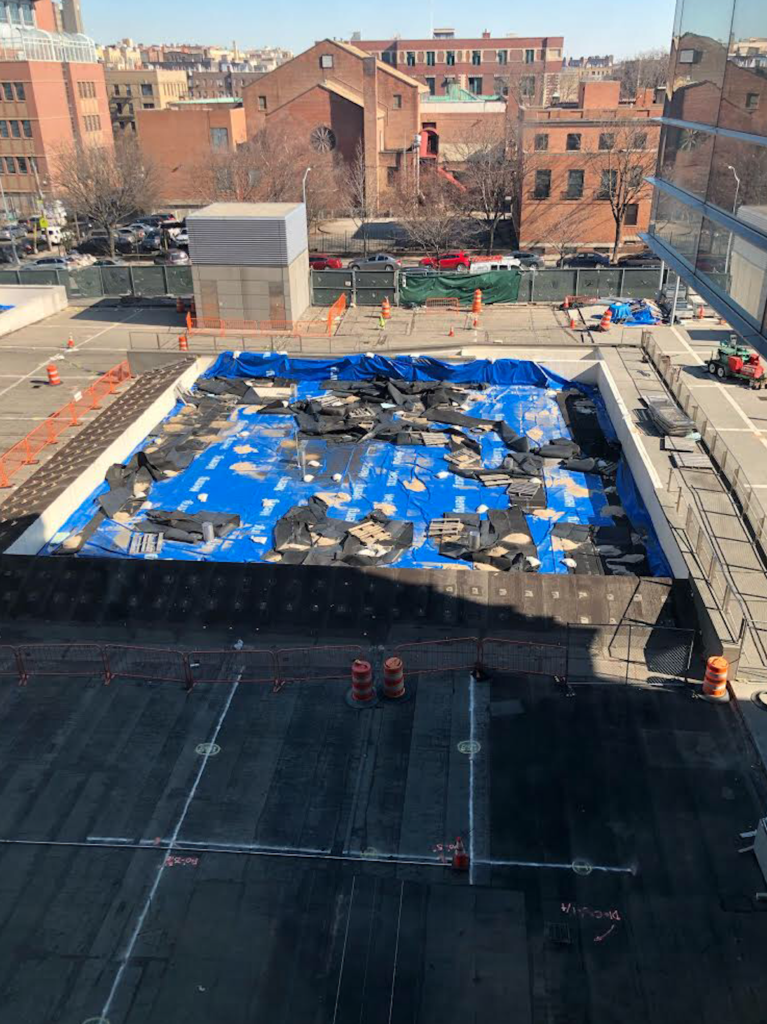 Pictured: An ongoing waterproofing project in the civic plaza began in October 2016. The effort is costing the city about $5.5 million—part of a $40 million project to address a host of problems at the Bronx Hall of Justice. Credit: Sasha Gonzales

The Hall of Justice, which houses the borough’s Supreme Court, is owned and maintained by the city, with the Department of Citywide Administrative Service responsible for day-to-day facilities management. The project’s construction was overseen by the state Dormitory Authority.

A litany of additional problems have cropped up the postmodernist building. Among them: $100 million in cost overruns, a three year delay in opening its doors, and a host of lawsuits involving more than 30 parties, from  architects and engineers to construction contractors and state agencies, including the Dormitory Authority.

The lowest-bidding contractor on the project was disqualified for suspected mob ties, and problems have been piling up ever since. Among them: a structurally compromised, underground parking garage inspectors once said was in danger of collapse; supposedly bomb and bullet-proof glass panels that routinely break; roof and sewage leaks, flooding, mold, power outages, a mice infestation, and broken elevators and escalators.

The property has also been the site of an accidental death.

A 22-year-old worker died during the construction of the Bronx Hall of Justice—his death setting off a fresh wave of litigation involving the property.

Joao Goncalves was pouring concrete at the East 161st Street site on June 10, 2003 when he fell down an elevator shaft, plunging from the seventh floor onto a second-floor landing, suffering terminal injuries.

Later, a 75-foot canopy at the courthouse’s entrance was removed after inspectors deemed it unstable. The initial inspectors who improperly signed off on the canopy work — Long Island-based Materials Testing Laboratories—were not certified, officials said at the time.

The project’s construction manager, Bovis Lend Lease, used numerous contractors at the site. The company, one of the world’s largest construction firms at the time, admittedto a massive over billing scheme on New York projects in 2012. They were hit with $56 million in fines and restitution fees as a result.

“It was so poorly constructed that the maintenance of this building is a drain on the public treasury,” Torres said of the courthouse.

The civic plaza sits atop the courthouse’s underground parking garage, which remained closed for years due to structural problems that,  at one point, placed it in danger of collapse.

An ongoing waterproofing project in the courtyard, intended to protect the garage’s ceiling, began in October 2016, according to the City’s Department of Design and Construction, which is overseeing the work.

The effort is costing the city about $5.5 million—part of a $40 million project to address a host of problems at the Hall of Justice. Among them: issues with the building’s heating, cooling, and ventilation systems, as well as “conditions that are causing interior glass to break, removal and replacement of defective paint, repair of damaged ductwork in the garage area, and rehabbing of the building’s sewer line and plumbing vent line,” a DDC spokesman Ian Michaels told Bronx Justice News last month.

The Hall of Justice also features a rooftop rock garden, which, like the civic plaza, remains closed to visitors. 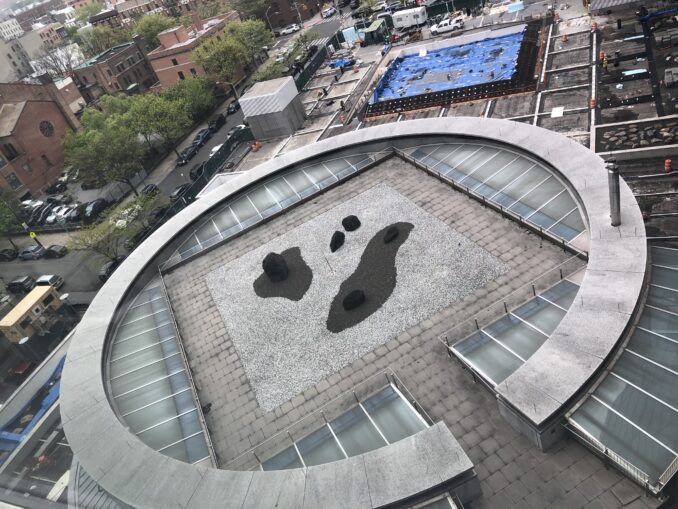 Well before the courthouses’s first day of operations in January 2008, court officers responsible for ensuring the safety of visitors saw potential for disaster: Weapons, drugs, and other illegal items could easily be tossed over the courtyard exterior from adjoining streets; rocks and other projectiles in the plaza could be hurled at the building’s glass exterior (the Hall of Justice also features a rooftop rock garden, which, like the civic plaza, has never opened to the public); staffing levels were insufficient to properly patrol and monitor the courtyard; and not a single metal detector had been installed at plaza entry points, meaning smuggled items could easily be brought inside.

More than a decade has passed since those concerns were first raised, yet the city does not appear to have taken any steps to address them.

“The same security issues which were stated back then exist today,” Lucian Chalfen, Director of Public Information for New York Courts, told Bronx Justice News. “Actually more so with the increased gang activity in the area over the past five years. The ability for people to congregate, secrete weapons and cause mischief remains.”

There are currently 366 court officers assigned to the Bronx Court Complex, which consists of the Bronx Criminal Court, Family Court, and Hall of Justice.

“However, we do not have the personnel to place metal detectors by the courtyard,” Chalfen said. “Our prime focus is to staff and secure the inside of the facilities.”

Patrick Cullen, President of the New York State Supreme Court Officers Association, applauded the move to investigate the building and its issues.

“I commend Councilman Torres for listening to the working class men and women who work in the courthouse, and for pointing out some of the real deficiencies in the process” of building and maintaining the courthouse, said Cullen, who is assigned to the Hall of Justice. “We welcome an investigation into how taxpayer money was spent.”

DCAS has said the waterproofing project is keeping the courtyard shuttered. But agency officials would not go on record to discuss the security concerns of court officials and officers, or provide a timeline for when the courtyard might eventually open to the public.

“The courtyard remains closed because the work on the site has not yet been completed,” said Nick Benson, Deputy Communications Director for the agency, told Bronx Justice News in April.

Torres said more information must be made public so that taxpayers know exactly how their money was spent.

“The public has a right to know the truth,”  Torres said.