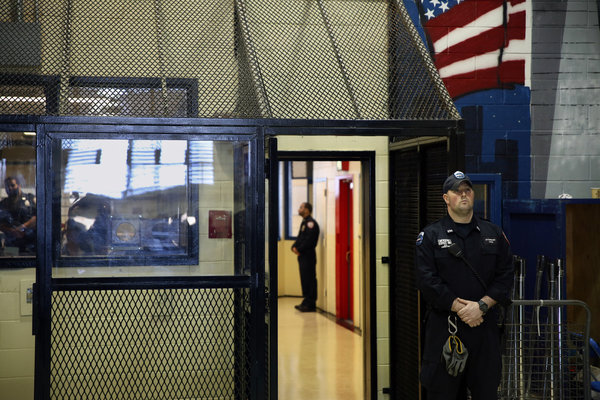 Article from NYTimes.com by By MICHAEL SCHWIRTZ and MICHAEL WINERIP

There is rare consensus among inmate advocates and correction officials that the surest way to fix the Rikers Island jail complex is to empty it.

While Mayor Bill de Blasio of New York is not prepared to go that far, he and the state’s chief judge will introduce a plan on Tuesday to gradually reduce the inmate population at Rikers by clearing the backlogs at state courts, a pocket of persistent government dysfunction that has long frustrated improvement efforts. Such backlogs can keep people locked away for hundreds of days while they await trial.

As of late March, over 400 people had been locked up for more than two years without being convicted of a crime, according to city data that is to be released publicly for the first time. And there are currently a half-dozen people at Rikers who have been waiting on pending cases for more than six years.

“Too many people have been detained at Rikers, sometimes for years, while they wait for trial,” Mr. de Blasio, a Democrat, said in a statement. “For the first time, our city will work with the courts, law enforcement, district attorneys and the defense bar to immediately tackle case delays head-on and significantly reduce the average daily population on Rikers Island.” 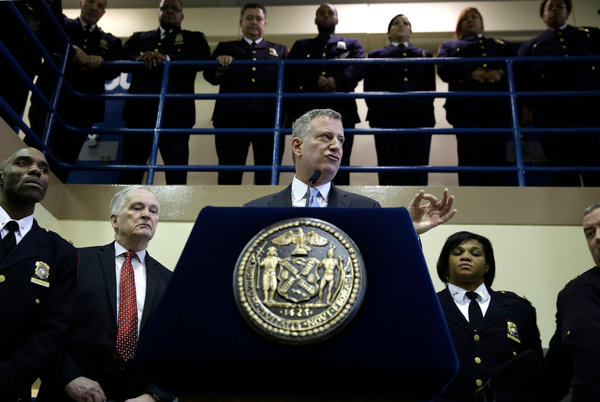 Mr. de Blasio with correction officers, including the correction commissioner, Joseph Ponte, near left. As scrutiny of Rikers has mounted over the last year, the mayor has devoted political capital and tens of millions of dollars to curbing jail violence. SETH WENIG / ASSOCIATED PRESS

Mr. de Blasio with correction officers, including the correction commissioner, Joseph Ponte, near left. As scrutiny of Rikers has mounted over the last year, the mayor has devoted political capital and tens of millions of dollars to curbing jail violence.
SETH WENIG / ASSOCIATED PRESS

As scrutiny of Rikers has mounted over the past year, the mayor has devoted political capital and tens of millions of dollars to curbing the violence in city jails. Under Mr. de Blasio, the Correction Department has eliminated the use of solitary confinement to punish 16- and 17-year-olds and has created new therapeutic programs for all inmates.

The mayor’s latest proposal reflects an acknowledgment at City Hall that making lasting reforms at Rikers will require looking beyond the jail complex itself to make changes to a criminal justice system that top officials now say has become too dependent on incarceration.

Under the proposal, officials hope to shrink the inmate population at city jails by 25 percent over the next 10 years.

Given recent history, that would be a modest reduction. In the past two decades, the number of inmates on any given day has already decreased from a high of over 20,000 to about 10,000 today. This is due in part to declining crime rates and to recent attempts to divert low-level offenders and those with mental illness into rehabilitative programs.

City officials believe that the Rikers population can and should be reduced further. Elizabeth Glazer, the mayor’s criminal justice coordinator, said that “a culture of delay” in the courts had kept defendants languishing in jail, eroding confidence in the justice system.

“It’s the single biggest driver of the Rikers population — the length of time people stay there,” Ms. Glazer said.

The state courts in the city are plagued with inefficiencies that cause cases to drag on and on, officials said. Some courts have too few judges and court officers; others lack enough interview rooms for lawyers to consult with clients. Delays occur when inmates are not brought to court on time, when witnesses fail to show up to testify or because of scheduling conflicts among overworked prosecutors and defense lawyers.

Sometimes, delay is part of legal strategy: As the months and years pass, memories can fade and witnesses can disappear. Interminable confinement can make defendants more willing to take a plea deal, if only to escape the horrors of Rikers.

The courts have persistently defied efforts to address the problems. Over the last two decades, New York courts have taken longer and longer to resolve felony cases even as the number of arrests has generally declined, said Michael Jacobson, a former correction commissioner who now heads the Institute for State and Local Governance at the City University of New York.

“Speedy disposition of justice is just an incredibly important moral obligation for a state,” he said. “These are pretrial; they’re not guilty of anything.”

As part of Mr. de Blasio’s proposal, all cases involving defendants who have been incarcerated for over a year — currently more than 1,500 people — are to be put on the court calendar within 45 days. The administration hopes that at least half of the cases can be resolved, through plea deals, convictions or exonerations, within six months.

The city is also developing an online tracking tool that will allow the authorities to monitor cases more easily and prevent backlogs. It is hoped that the tool will help reduce time-wasting adjournments by ensuring better coordination between prosecutors, defense lawyers and judges.

To ensure long-term efficiency, special teams of prosecutors, defense lawyers and court and law enforcement officials, led by each borough’s administrative judge, will work to resolve the underlying causes of the delays. Ms. Glazer said the teams, which would receive compensation in part from the city’s asset forfeiture funds, would then make recommendations to a citywide committee at City Hall.

“This is something that every judge is being asked to do and every district attorney and every defense lawyer, as simply a new way of doing business,” she said.

There are other factors that can tend to keep defendants in jail for extended periods. Inmates with mental illnesses, who now make up nearly 40 percent of the Rikers population, have been shown to stay longer than those without them. Poverty also plays a role: The poorest defendants often cannot afford bail, even if the amount is modest.

But court delays, more than any other factor, drive the overall jail population, officials said.

Clearing the backlogs will require coordination among a host of often rivalrous actors, perhaps most importantly judges, who are members of the state, not city, government.

New York State’s chief judge, Jonathan Lippman, will join Mr. de Blasio in announcing the plans on Tuesday. In an interview, Judge Lippman said he was committed to making them work.

He pointed to recent efforts to clear backlogs in Bronx courts as an example of how the mayor’s proposal could play out. As of late March, nearly 200 people with cases before the borough’s courts had been at Rikers for over two years, more than anywhere else in the city, but still a significant drop from just a few years ago.

“What drives a judge crazy,” Judge Lippman said, “is a culture that seems to think that it’s O.K. that people sit around incarcerated.”

“And when they’re called before the court, everyone’s got some reason we don’t proceed,” he added. “That’s the frustration that we see.”