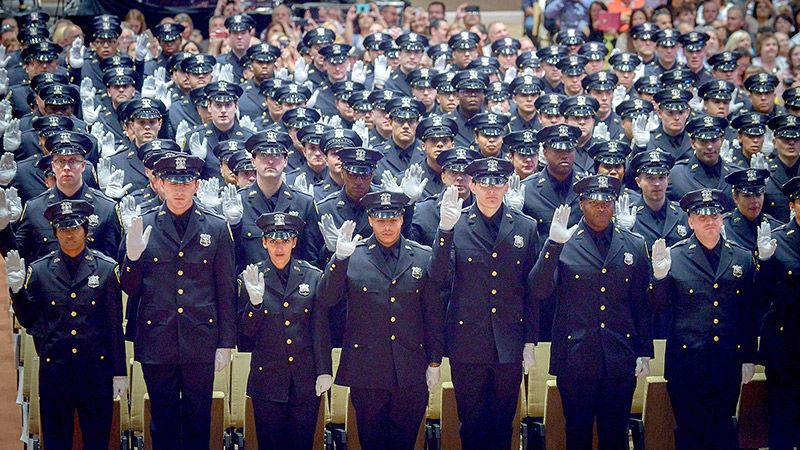 Article from The Chief

Following four months of training at a new facility in Brooklyn, the largest-ever graduating class of Court Officers—222 recruits—is deploying to state courts throughout the five boroughs and on Long Island, as well as within the Ninth Judicial District, including Westchester and Rockland Counties.

Chief Administrative Judge Lawrence K. Marks administered the oath of office to the newly minted officers on June 12 at the Christian Cultural Center in Brooklyn.

They join the ranks of the court system’s 4,000 Court Officers, as well as roughly 2,000 non-uniformed peace officers, which together make up the state’s second-largest law enforcement agency after the NYPD.

Patrick Cullen, the president of the New York State Supreme Court Officers Association, said the influx of officers would help assure safety within the court system.

“On behalf of the men and women of the Supreme Court Officers Association, we proudly salute the graduating class of court officers who will now join the ranks of the best court officers in the nation,” he said in a statement. “Their graduation also represents the tremendous success of our year-long campaign for safer courts, which called on OCA to hire many more court officers to address our dangerously low staffing levels.”

They did so at the Captain William H. Thompson, Sergeant Thomas Jurgens and Sergeant Mitchel Wallace Court Officers Academy, a 60,000-square-foot facility built on the site of a former school in Crown Heights that is named for three court officers who died during their rescue efforts at the World Trade Center on 9/11.