“I have vetoed similar or identical bills in each of the past several years because the costs imposed were no accounted for in the State’s financial plan,” Cuomo wrote. 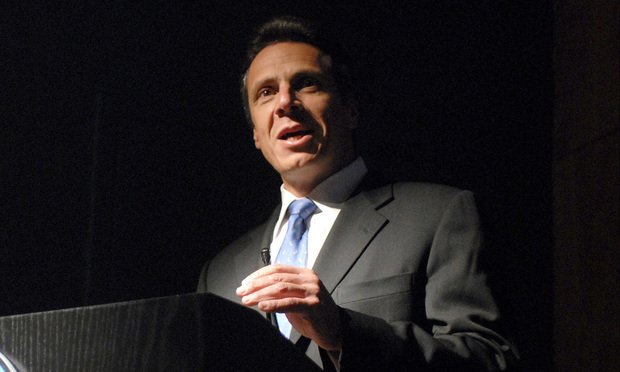 Gov. Andrew Cuomo, for the fifth year in a row, has vetoed two bills that would have expanded retirement and disability benefits for the state’s court officers, citing concerns over the potential fiscal impacts of the legislation.

The rejection is a blow to the state’s unions for those officers, who have supported the legislation as a way to give their members the same benefits as public employees with similar duties, like corrections officers and law enforcement.

Pat Cullen, president of the New York State Supreme Court Officers Association, said on Saturday that Cuomo’s veto of the legislation was hypocritical given his appearance at a rally this week supporting a local union’s strike against Charter Spectrum.

“It’s a mixture of extreme frustration and anger toward not per se the vetoes themselves, but the hypocrisy behind the whole thing,” Cullen said. “Just Wednesday afternoon, Gov. Cuomo stood at a rally for [IBEW] Local 3 and their ongoing labor battle, and for the last year and a half has stood at labor rallies across the state saying the state has their back.”

Cuomo suggested in the message that the bill’s sponsors could instead try to include the proposals in next year’s state budget, which is due at the beginning of next April. Those sponsors, Assemblyman Peter Abbate, D-Brooklyn, and State Sen. Martin Golden, R-Brooklyn, were not immediately available for comment on Saturday.

The veto was not surprising considering Cuomo had rejected the bill four other times for similar reasons, and the text of the legislation has not changed since the last time he reviewed it. He said in the veto message that the bills sought to spend state funds without showing where the money would come from or how it would be allocated.

“I have vetoed similar or identical bills in each of the past several years because the costs imposed were no accounted for in the State’s financial plan,” Cuomo wrote. “As such costs must be addressed in the context of annual budget negotiations, I am therefore constrained to veto these bills.”

Union leaders said earlier this week that they would continue to push for the legislation to be included in next year’s state budget if Cuomo issued a veto. They repeated that commitment on Saturday.

“We’ll be in Albany and we’ll be knocking on every legislator’s door,” Cullen said. “We’re going to continue to fight, there’s no question about that, but now we have to go back to our members and say your employer thinks less of you than other people who do a similar job.”

The legislation would have given court officers some of the same employment benefits already offered to other public protection employees, though the cost of those changes is unclear.

The first bill would have allowed court officers to claim an accidental disability retirement if they are injured while performing their duties and can’t return to work. Union leaders have said that being hurt on the job is not uncommon for court officers, who are responsible for safeguarding the state’s courts.

The proposal was significant, union leaders said, because court officers are currently only entitled to regular disability if they can’t return to work, even if their injury happens on the job. That allows them to collect a third of their regular salary while they’re unable to work. The legislation would have increased the amount they’re able to collect to three-quarters of their salary.

Not having that benefit makes it difficult to recruit individuals to become court officers and retain them within the court system, said Dennis Quirk, president of the New York Court Officers Association.

“Why should our people stick their neck out anymore?” Quirk said. “We hire people and because of this they leave. They go to the police department, the fire department. No other law enforcement agency treats their people this way.”

That benefit is already available to certain other public employees, like police officers, firefighters, and corrections officers who were hired after April 1, 2012. When the state created a new pension tier for public employees hired after that date, court officers were left out of an exception that would have allowed them to retire early with lower penalties.

Cuomo, in a veto message, said the cost of that change could have been unintentionally passed on to local governments, who already pay a sizable share of pension costs for public employees. That could then drive up property taxes, Cuomo wrote.

Lawmakers will have another chance to include the legislation in next year’s state budget after they return to Albany in January for the start of the new legislative session. If Abbate decides to introduce the bills outside the state budget process, he’ll need a new sponsor in the state Senate. Golden was ousted from his seat in this year’s general election.