Article from the Brooklyn Eagle by Rob Abruzzese 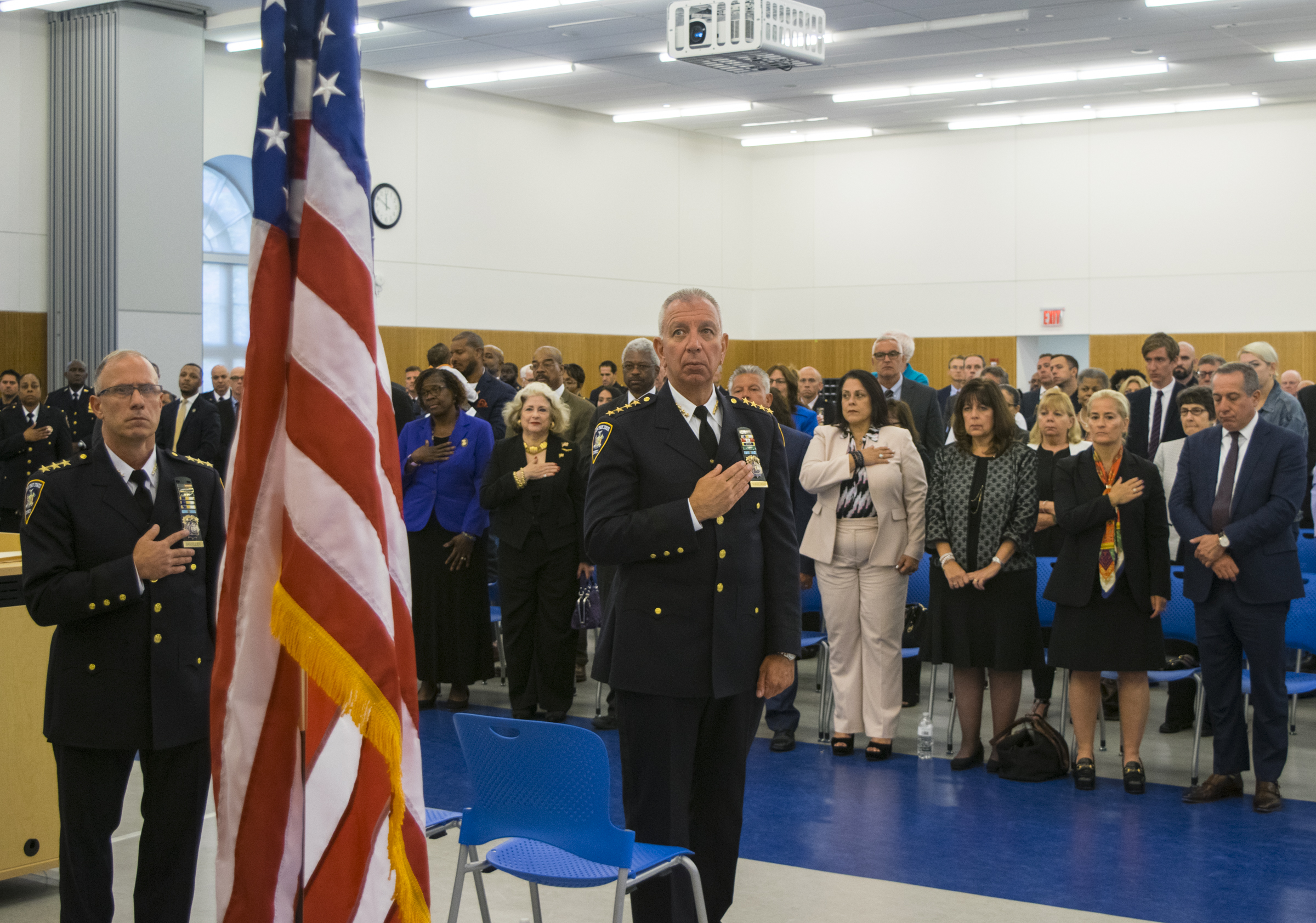 The New York Unified Court System held its annual 9/11 commemoration event in Brooklyn on Wednesday at the court officer training academy that was named for the three court officers who died during rescue efforts.

“In solidarity with the rest of our country, we honor the memories of thousands of Americans whose lives were senselessly taken from them and their families 18 years ago today, including our three heroes Capt. William Thompson, Sgt. Mitchel Wallace and Sgt. Thomas Jurgens,” said Hon. Janet DiFiore, chief judge of the New York State court system in a pre-recorded speech. 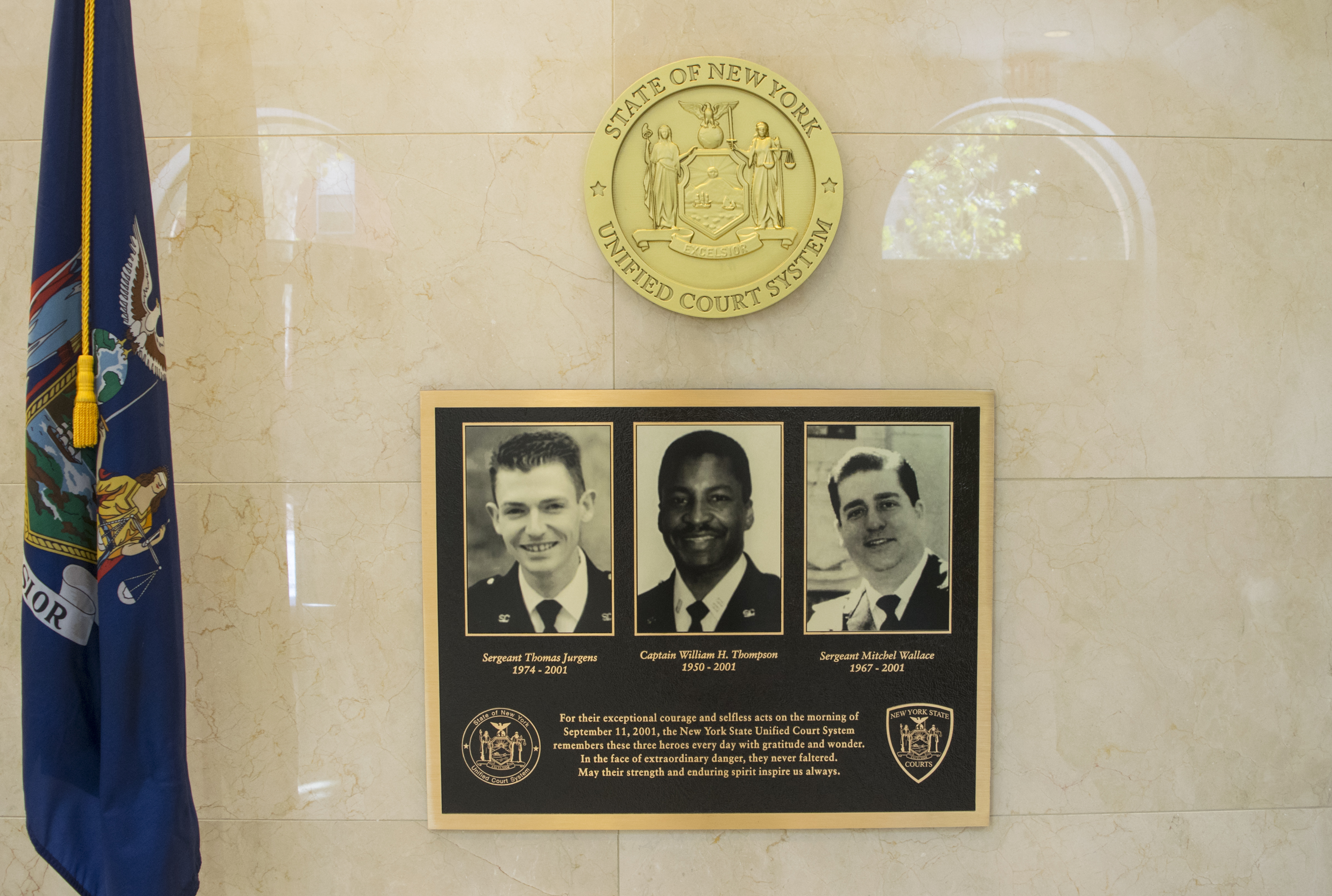 The portraits of (from left) Sgt. Thomas Jurgens, Capt. William Thompson and Sgt. Mitchel Wallace are placed at the entrance of the court officer academy building that bears their name. The trio died during 9/11 World Trade Center rescue efforts.

“Eighteen years ago, we witnessed the very worst and the very best that human nature has to offer,” said Chief Judge DiFiore. “The very best was reflected in the selfless actions of the scores of New York State court officers who rushed to the scene of the north tower within seconds after the first plane struck, along with the thousands of uniformed heroes from the police, fire, Port Authority and other emergency services, some who gave their lives that day.”

The event, led by Chief of Training Joseph Baccellieri Jr., chief of training at the academy, and Michael Magliano, chief of public safety for the New York State courts, was simple and somber. Court officers presented the colors and the New York State Courts Pipes and Drums performed a medley of songs to mark the occasion. Court Officer Letitia Lynch opened and closed the event by singing the national anthem and then “God Bless America.”

“It has been 18 years since those evil attacks on our country, 18 years since our world changed and will never be the same again,” said Baccellieri, who read quotes from Presidents Barack Obama and Abraham Lincoln. “When the decision was made to have this year’s commemoration at the academy, I started thinking what can I say that I haven’t said for the past 18 years. I came to the conclusion — nothing.” 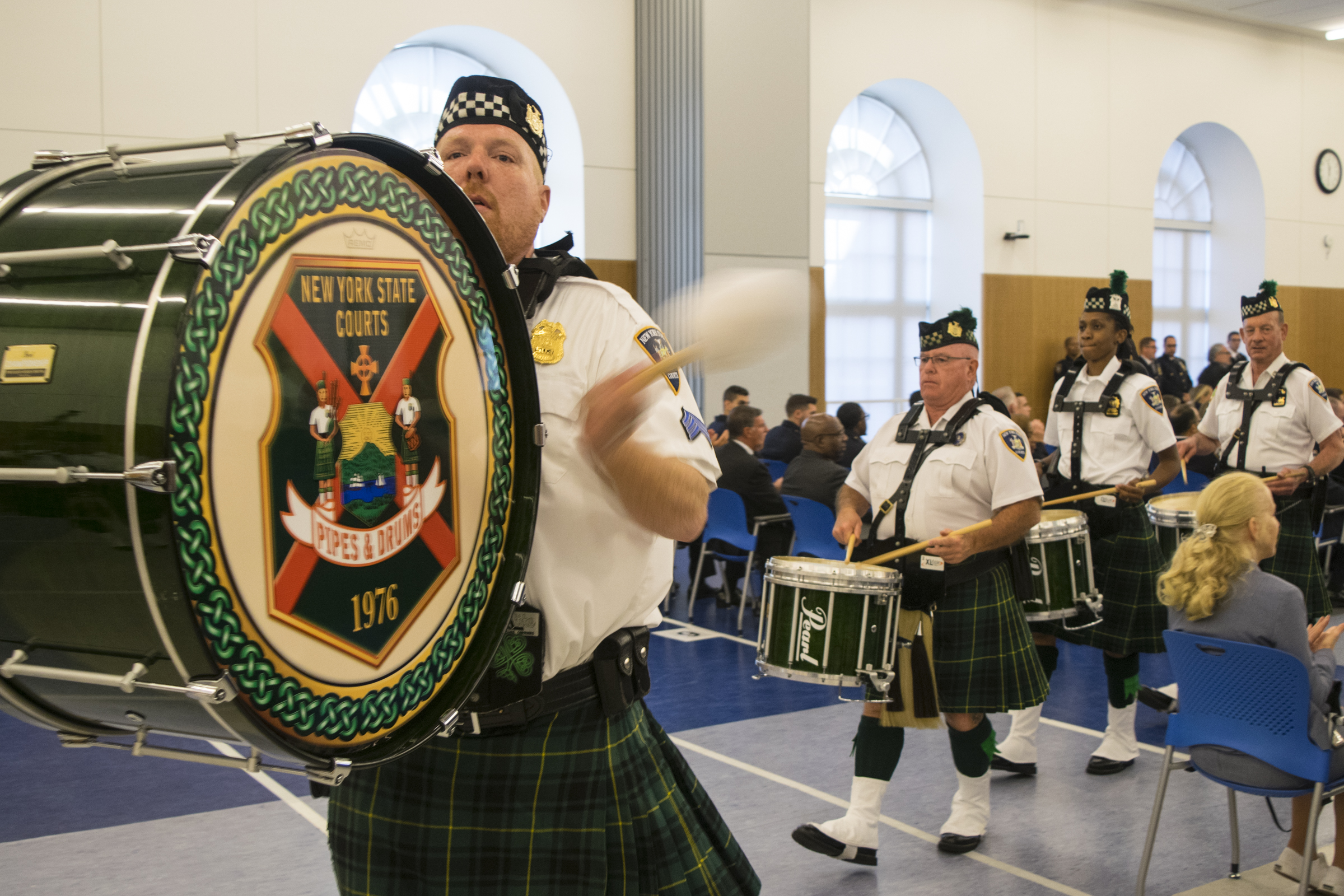 The front row was filled with administrative and supervising judges from various courts in the city and state. Justice Lawrence Marks and Justice George Silver both gave brief remarks.

Justice Marks, the chief administrative judge, spoke about the growing importance of such events as time passes, so that young people can learn about the history of the day.

“More and more, as the years go by, there will be people who learn about Sept. 11 only secondhand,” Justice Marks said. “More and more, there will be Americans who have not lived through 9/11 and will only know about it through our history. So, this is a day to reflect and remember, to think about what happened and why, and how it has changed our lives and identity at home and around the world, how it has reshaped America and this city in particular.” 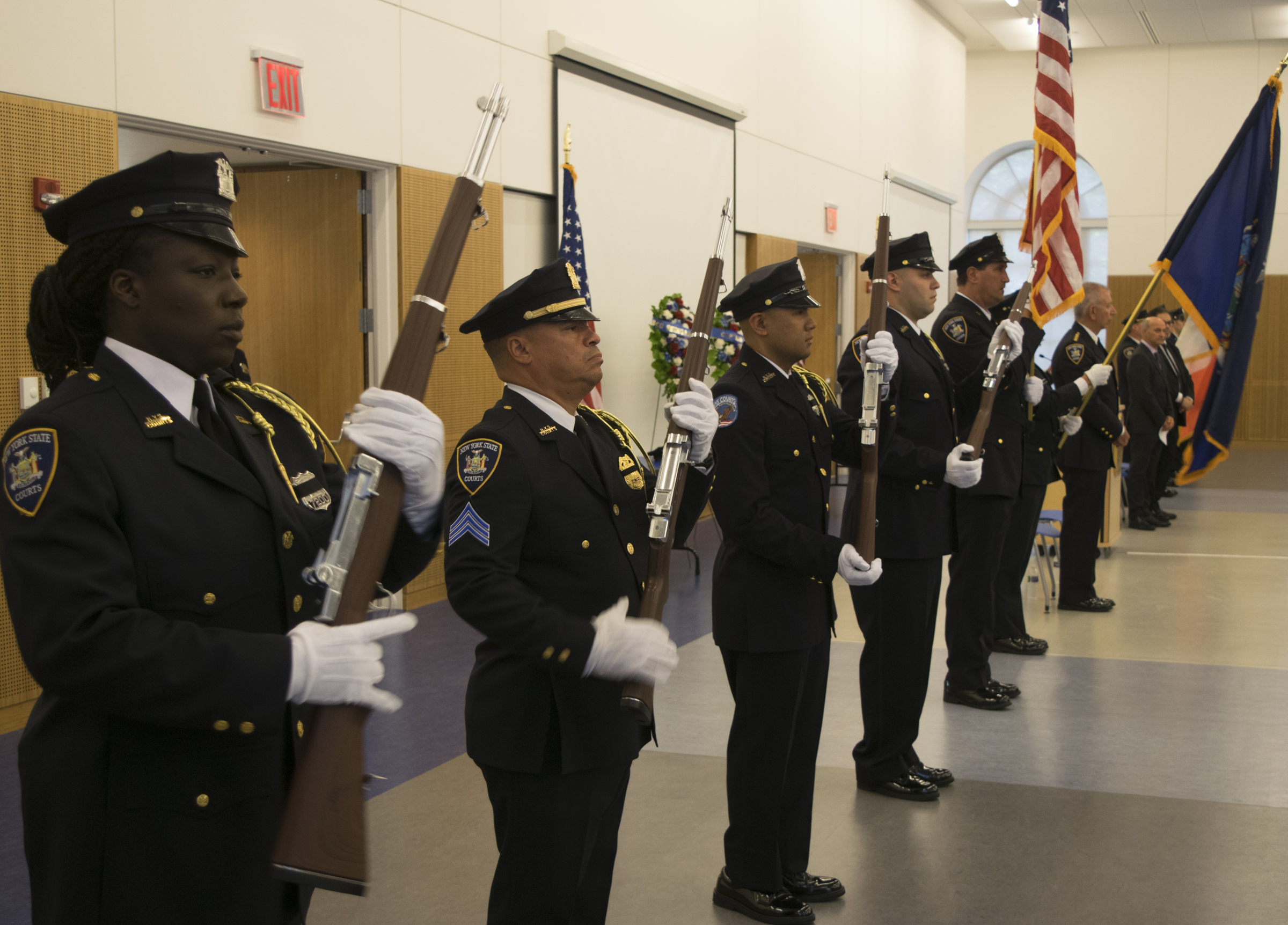 Justice Silver, the deputy chief administrative judge, explained that it is important to remember the three court officers that died that day. He said that he hoped the families of the fallen officers can take solace in the fact that their memories will inspire thousands of current and future court officers.

“We as a court family gather today to honor, in a very special way, the lives of three of our own — Capt. Thompson, Sgt. Wallace and Sgt. Jurgens,” Justice Silver said. “They understood better than most that there is something greater than just ourselves. They were people who embodied the principal that there is no greater love than to lay down one’s life for another.

“They will forever be heroes,” Silver continued. “Fittingly, from now on, every court officer trainee who walks through the doors of this academy will remember the sacrifice of these heroes, and will be reminded of the standard of courage and selflessness that was set by them, our heroes.” 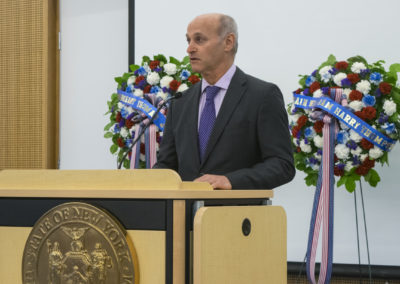 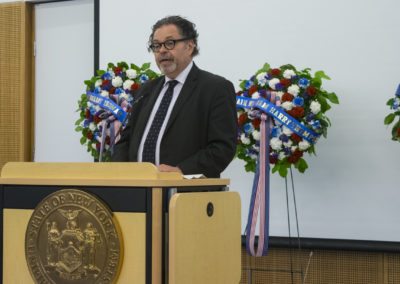 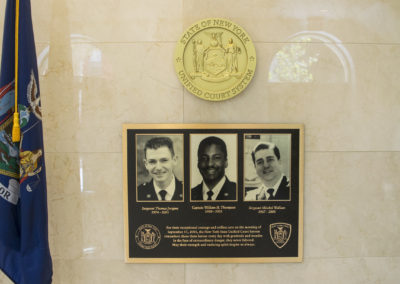 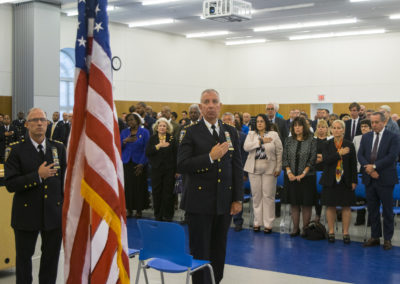 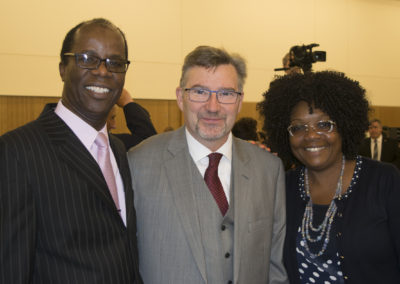 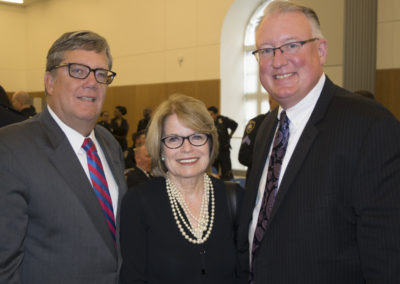 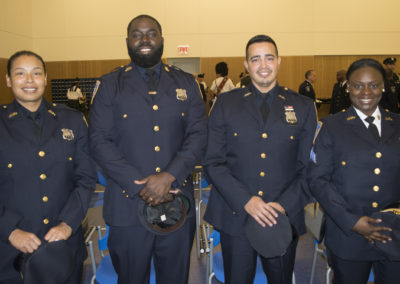 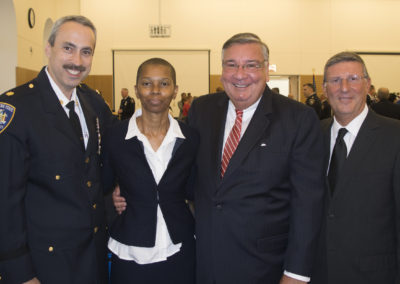 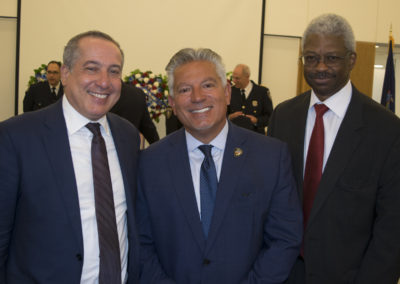 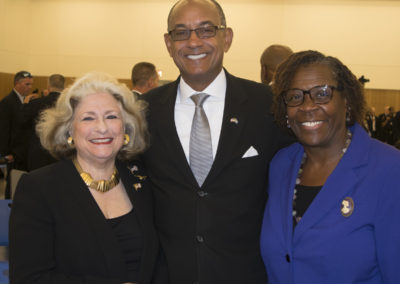 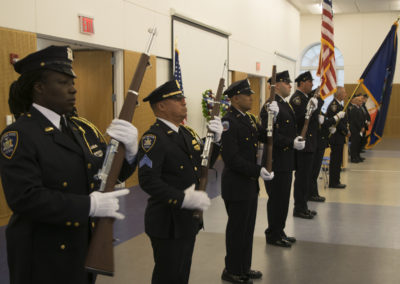 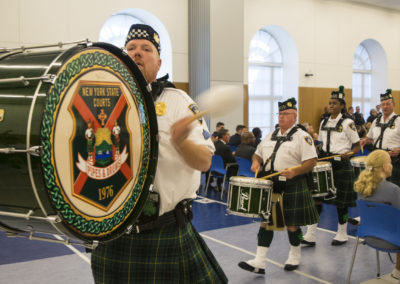 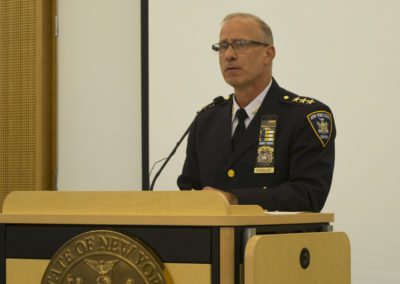