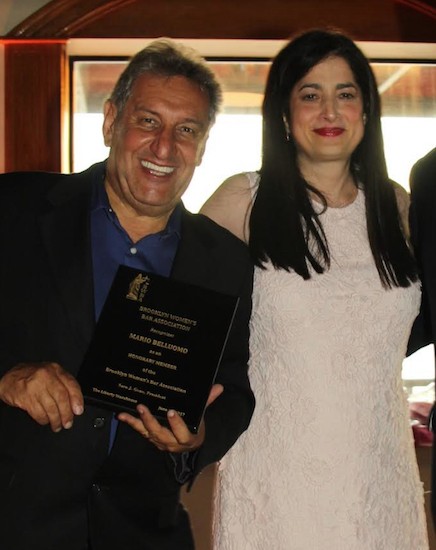 Mario Belluomo, seen here being honored by Sara Gozo and the Brooklyn Women’s Bar Association in 2017, served as a court officer for 40 years and as a photographer of the Brooklyn Eagle for 24. Photos courtesy of Mario Belluomo

The Brooklyn court system is one of the busiest in the country with people coming and going at a dizzying rate, but for the past 40 years one person was consistently a welcoming face in the Brooklyn Supreme Court — Court Officer Mario Belluomo.

Belluomo was born in Sicily and he immigrated to the U.S. as a 5-year-old in 1958. He said life was good for his parents, but that his mother fell in love with America after watching movies. He became a court officer after his two-year stint in the U.S. Army because, as he explained it, every young Italian-American took every civil servants exam.

“I did very well on the court officer exam, one of the highest scores in the city, and I got the best job in the world,” Belluomo said.

Belluomo is ubiquitous — after 40 years as a court officer and 24 years working with the Brooklyn Eagle as a photographer, he knows practically everybody in the local legal community. During 17 years of his 40-year career, he worked in the “fishbowl” at the entrance of 360 Adams St., and greeted everyone who came into the building and answered all phone calls.

“Before the metal detectors, I was literally the only one [at the entrance] that everyone came to for information for 17 years,” Belluomo said. “The building was abuzz, there were no metal detectors. Everyone came to me to see where everything was — the lawyers, judges, anyone working in the court and everyone who had to be there that day.”

At his busiest, Belluomo said that he dealt with approximately 800 people. He called those 17 years in the fishbowl his favorite because he loves helping people. 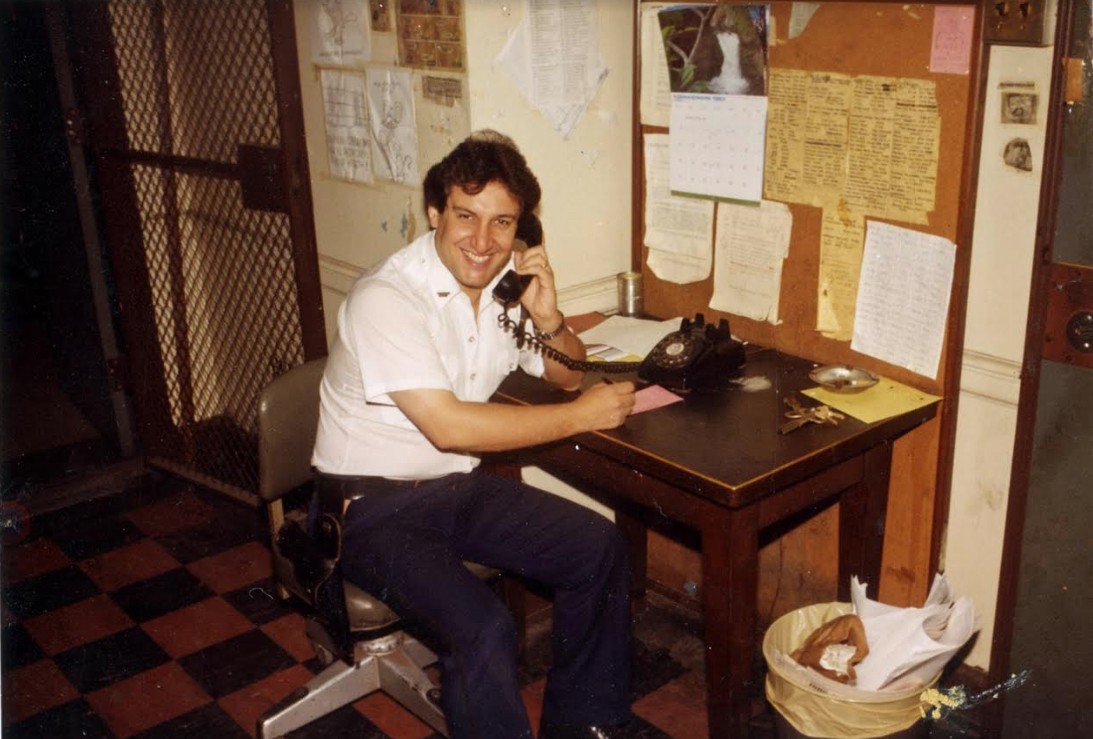 A 40-year-old photograph from Belluomo’s first year on the job.

“People don’t want to come to court, but they have to, and they’re afraid,” he said. “You see people come in and you hurt for them. They are a mess. I guess it’s just a part of my Sicilian nature to want to help people.” 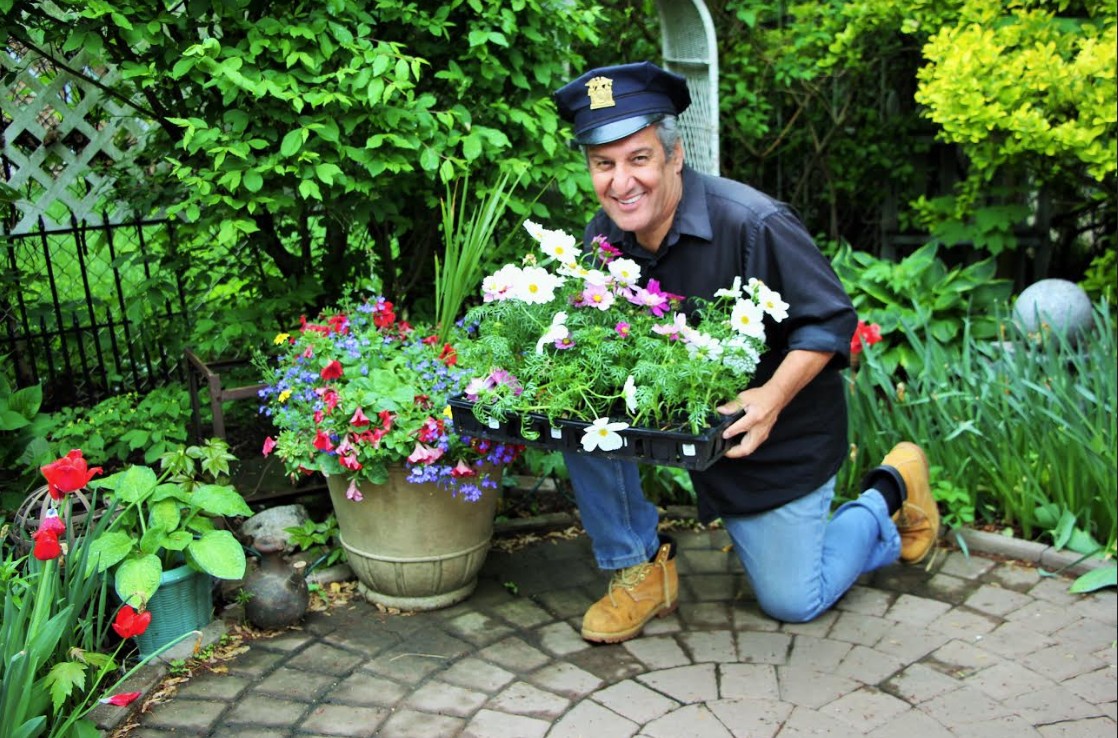 Belluomo’s biggest hobby is to tend the garden in the backyard of his Staten Island home.

It is a point of pride that Belluomo knows as much about the court as he can so that when people ask him questions he knows the answer and can avoid giving them the runaround.

“Most people get a run around from agencies and I would say to them, ‘Stop, I know everything and I’m going to tell you exactly what to do,’” Belluomo said. “They might be argumentative, but they leave knowing what to do. I don’t like the runaround. I’ve had people tell me I’m the 10th person they’ve talked to and I always say, ‘Well, I’m going to be the last.’”

One of the things that Belluomo is most well-known for is his humor which he’ll admit can be controversial. No one has ever complained about him, though, because, as other court employees point out, his jokes and attitude would be disarming.

“He’s not afraid to target anyone with his jokes,” said Joseph Rosato, incoming president of the Columbian Lawyers Association of Brooklyn, and a former court officer. “He might make a joke of a political nature, or about a different nationality, but he would also make fun of himself, or Italian-Americans, or Catholics. You can tell that he doesn’t take life seriously and doesn’t ask others to take him seriously either.”

Belluomo said that even though he can be controversial, people like it because it’s his way of connecting with them.

“I mock because the whole world is a mockery, but I care about people,” he said. “We’re all a mess, I’m a mess too, and there is no reason to be nasty to them. Some people just want to be in on the jokes.”

Belluomo even tried his hand at stand-up comedy and did four separate sets in Manhattan comedy clubs in his 40s. That hobby was short lived, though.

Belluomo likes to keep himself busy by working as a photographer and tending to his garden. Starting from the time he was 10, he always had a passion for photography and throughout his career he worked most weekends taking wedding photos.  Since the age of 19, he has photographed over 3,000 weddings in total.

“Since I was 10 years old I would put negatives under hot water to see if they came out because I saw it in the movies, the guy putting it under the liquid. I did wedding photography almost every weekend and during the week I’d be back at the courts. I try to constantly stay busy.”

In fact, even after 40 years, Belluomo struggled with the idea of retirement. He used to joke with Dominic Famulari, the president of the Catholic Lawyers Guild, about seeing the 100-year-olds with nothing to do sitting at Dunkin Donuts and say that he never wanted to be like them.

He finally made the decision to retire in March, a bit unexpectedly, but he’s planning to spend time with his hobbies, which also includes book, toy and figurine collecting, and by spending time with his wife, Barbara, and their two kids who both work in law enforcement.

“I loved my job. It was the greatest job in the world,” he said. “I didn’t want to retire, but I’m 65 and it’s not exciting to me anymore. I want to move around. I wrote a poem that says it all: ‘Having just retired and getting older, I am a flower, I’m waiting for a breeze to take my petals away and have the useless stem eaten by slugs.’”